In order to give more background, history, story, ETC… to these wondrous cards of my father’s, of which there are now over 100 published images (!), what follows is a bit from the dredges of dusty archives.

Story is what makes card reading. As a reader, you are a story teller. So good to start thinking that way, and how cards connect to each other through this timeless art. My dad was a marvelous story teller. Everything was subject for story, nothing off limits. For example, I remember once he told the entire family I had moved into an old gas station. Seriously? Well, knowing that my dad’s fantasies had a weird way of connecting to reality, I decided to do a little research. Turned out there was an element of truth in his tale, although not exactly the way it seemed. Come to find out my husband’s workshop had been an old gas station at one point. So there was some connecting the dots required on my part.

Anyway, I diverge, but only to bring home the idea of story telling. Stories don’t have to be 100% true to be effective. They provide a framework for bits of information that can prove helpful to a person. So loosen up! Stories connect us to a more intuitive part of the brain and convey things that cannot be otherwise communicated in ordinary conversation.

Often I see questions within the Playing Card Oracle community about androgyny or how people who are gay or bi may be represented in the deck. So the particular story that follows should be helpful with that as well. This is one little scrap from my dad’s prolific writings, more of which will follow in these posts, so STAY TUNED 🙂

Oh. Also, you can open a PDF of my dad’s original typewriter written sheets of this story HERE. Happy Birthday! <3  (It is your birthday today, right? I thought so.) 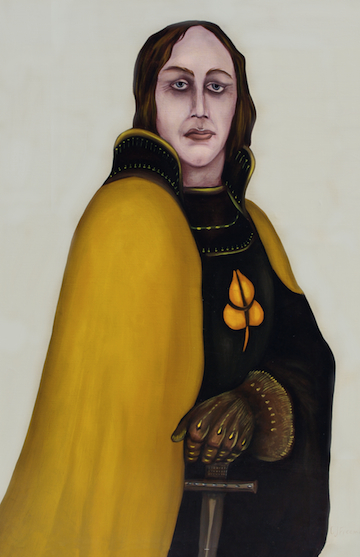 An ordinary pack of French playing cards still assigns names to the court figures identifying them with famous personalities in history and literature. In this tradition, Lancelot Du Lac, undisputedly the most famous knight of the Arthurian romances is usually named the Jack of Clubs.

Somehow, Lancelot’s mighty deeds, his triumphs, failures, and great suffering seem fanciful, but still relevant today as they must have been when first written more than 800 years ago. All the other round table heroes pale noticeably when viewed from our modern perspective. Sir Gawain, for instance, the most popular hero in early English chivalry is almost totally forgotten today. What is it then about Lancelot that sets him apart from his fellow knights?

An only son to King Ban of Benoic by Queen Helaine, Lancelot was first baptized Galahad, a name he later bestowed on his only son. Upon the death of the mother, he reportedly was taken from his cradle and carried away to be raised in “a land under waves,” by the Lady Du Lac (of the lake,) a fairy creature who bestowed magical powers upon him and baptized him Lancelot Du Lac. 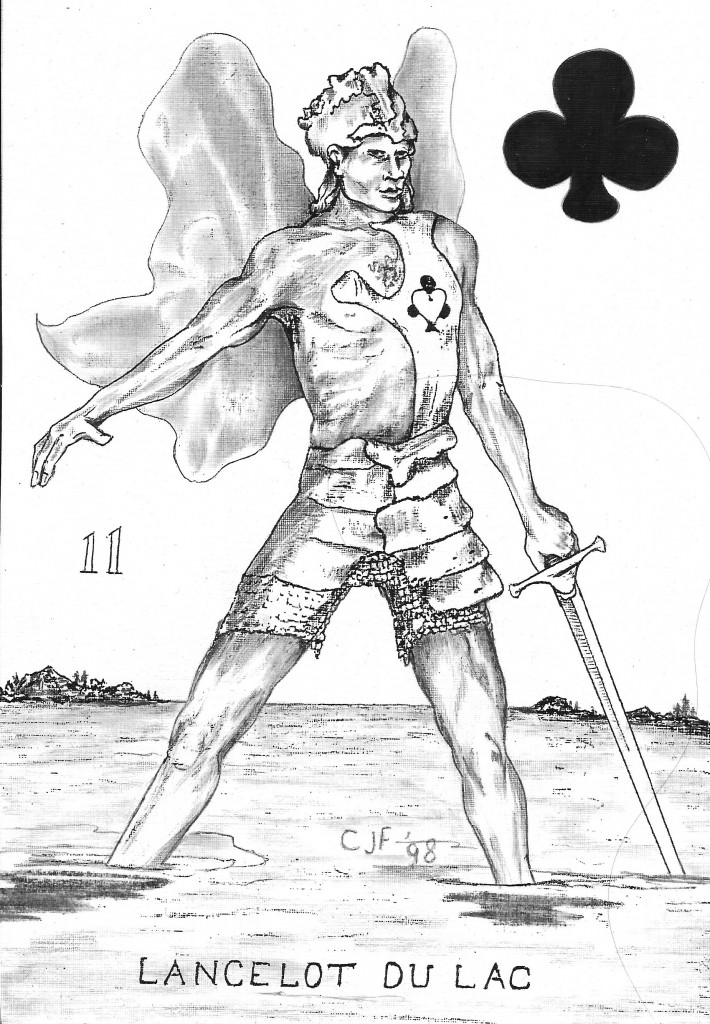 This early and extended chapter in his life (he was eighteen when he left the lake,) helps explain much of Lancelot’s extraordinary character and potent magnetism. Here we are presented not with an ordinary man who simply encounters supernatural forces in the course of some adventure, but with a supernatural man who was raised from an early age apparently under water (in the unconscious) by these forces. This is a character charged with magic, a very different man indeed, when compared to his fellow knights who represent only the masculine heroic ideas of medieval chivalry.

Lancelot embodies an ideal masculinity that exists not in the physical world but in a mythical world inhabited by the Lady of the Lake – his fairy mother. This is a realm found in the female psyche, an intuitive, magical world that he enters as a small boy to emerge transformed into Lancelot. Essentially, he is reborn not a man but a magical creation – an androgyne or total person being both male (rational – conscious) and female (intuitive – unconscious.)

The name L’ancelot is of French origin and means “the young man servant,” being a diminutive of the old French word “ancele,” which derives from the Latin “ancilla,” or servant. So Lancelot Du Lac, the Servant of the Lake, is bound by his given name to a magical realm under waves – hidden in his unconscious, which nourished him into manhood. It is this powerful matrix of his personality that fashions Lancelot in a special mold and charges him with magic.

As the Jack of Clubs, Sir Lancelot represents a magical androgynous character with tremendous powers to transform and transcend the physical world. Without question he is certainly the most important Jack and potentially one of the most powerful cards in the pack.

To open PDF of original typewriter written draft of this by C.J. Freeman, click HERE.