Numerology is truly an ancient means for better understanding oneself and the world, but what if there is yet another little known possibility to this tried and true science? What happens, for example, when the science of numbers meets the symbology in cards, specifically the art of cartomancy? Here lies a near explosive potential that has been under explored for far too long.

I will speak here of numerology and how it can be used with playing cards for revolutionary insight. I am sure this could be applied to Tarot cards, as well.  Cards  – playing cards – have all the 9 numbers of traditional numerology, but they appear in the deck 4 times each. Once in Hearts, once in Spades, once in Diamonds, and once in Clubs. Now playing cards are a language of symbols, obviously, and just as numbers are symbols representing concepts, so are the suits themselves. 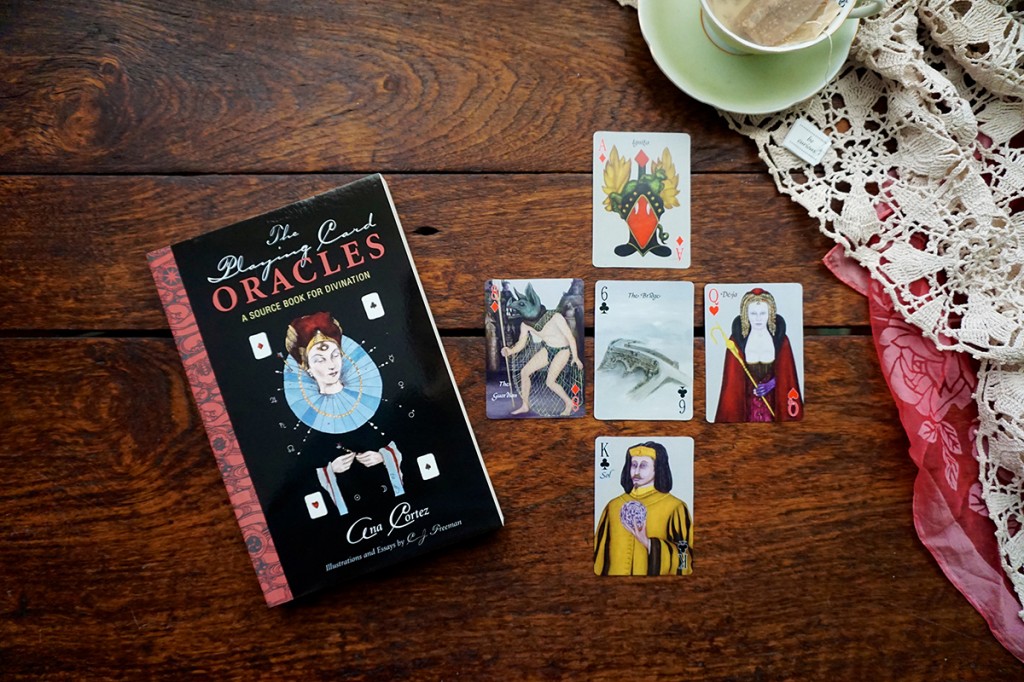 Numerological meanings are illuminated by the Elements and by illustrations in this new deck. An Ace and an Eight appear here in the Element of Fire, a Six and a King in Air, and lovely Queen in Water Element.

As hinted at by the name of my newly published deck, “The Playing Card Oracles, Alchemy Edition,” playing cards contain alchemical codes. The 52 cards not only represent the 52 weeks of the year and the suits the 4 seasons, but the suits also symbolize the traditional elements of Fire, Air, Water, and Earth. This is so very useful in card reading, giving each suit a “personality” and a unique relationship with the other suits. But this idea of the suits being elements is also an evolutionary idea when it comes to numerology.

Numbers in suits means that each of the numbers now has a multi-fold possibility. The number One, for example, (appearing in the playing card deck as the “Ace”) can be either a Fire number One, an Air number One, a Water number One, or an Earth number One: each related but having a certain slant to it.  To begin to understand this, imagine the rugged individualism expressed by the number One as it meets the bold confidence of Fire, or conversely the cold receptivity of Air. This is not unlike Chinese Astrology, with the 12 zodiac signs each appearing in one of the 5 Chinese Elements. For example, in Chinese Astrology, I am not just a “Dragon,” but a “Wood Dragon,” which tells so much more about me.

Numbers mix and mingle with Elements on the table.

So all this is really great in theory, but even more amazing in practical application. In my experience I have yet to find anyone making full practical use of this revolutionary leap except in the card reading system brought into being by my own father, C.J. Freeman. It is all before you in detail in the book we created together, The Playing Card Oracles, A Source Book for Divination.

Of course, I did not mention the “upper cards,” number 10 through King, which have a unique role within the deck. They are the personalities that play out or “experience” the numbers of the lower cards… but all that is written of in the above mentioned book.

Numerology is a fascinating lens through which to view the playing cards, and when put to use, revitalizes the art of card reading substantially. If you are a numbers person like me, you owe it to yourself to check this out.