The creation of the newest deck of Oracle Playing Cards feels like one of the most karmic undertakings I have ever experienced. What a journey. In fact, in the 35 years since the art was created, a lot of times it felt like these fantastic and original images would never, ever see the light of day. Often I know my dad questioned why he’d been driven to create them. I mean why such an undertaking if no one would ever see, ever appreciate them? 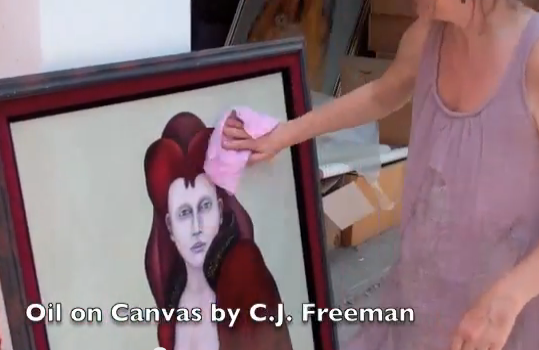 I remember sitting next to him as he lay in the bed, a few weeks before he passed away, and him asking me in private if I thought he should “just give the paintings away.” This was his life’s work, and since their creation it had been nothing but disappointment, rejection, and dreams torn into so much confetti. I thought for a moment and the only thing to say was “no.” Of course! I had no idea what would happen with those paintings, if anything, but to just scatter them to the wind like my father’s dreams was not an option. Oh sure, my dad created what is now published as “The Playing Card Oracles Divination Deck,” but this was a minor effort compared to this first great work, a pen and ink reprise of what had originally been done in rich oils on large 42″ tall canvases. Imagine. 54 life like, otherworldly images, with faces and torso’s as big as your own. 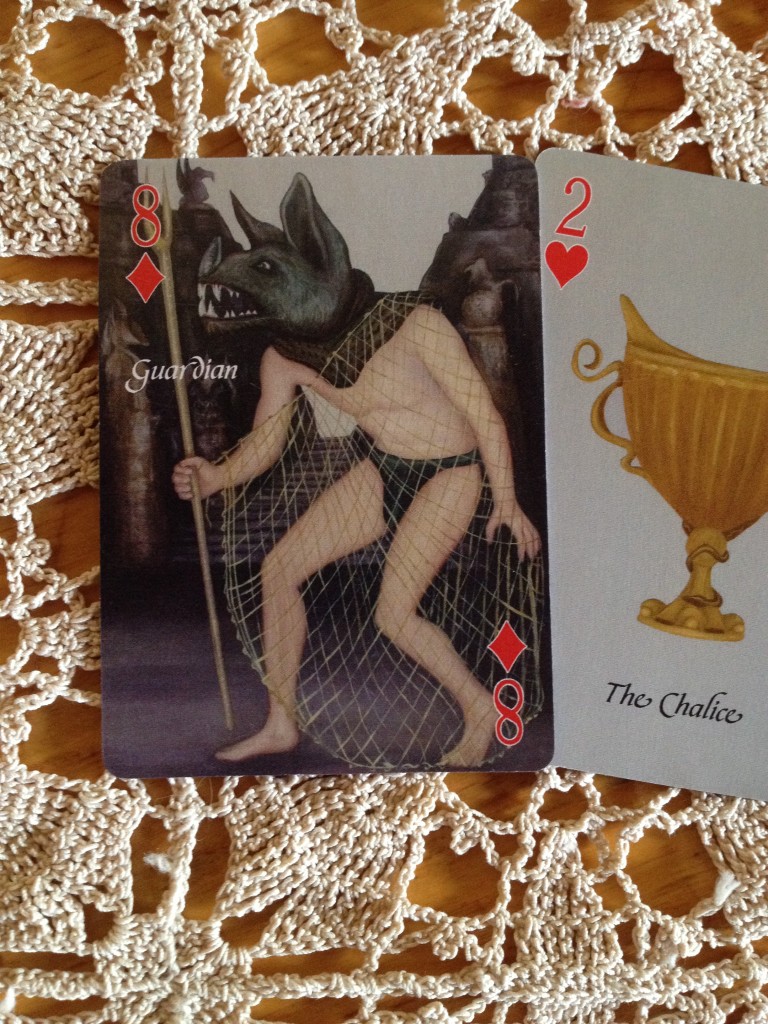 I became the “Guardian,” the 8 of Diamonds from the new deck (preliminary sample card shown)

So when my dad passed in the summer of 2010, I became “keeper of the paintings.” And good that I was. Someone had to guard those things. And fiercely. Already there were paintings missing. Now, keep in mind there was one painting and one painting only created for each card in the playing deck. They were made as a set. Without any one suddenly everything is screwed. My dad didn’t paint anything else to speak of. So each one is super valuable. Between the younger adults in the family coveting them for their beer pong hangout and the small but enthusiastic Christian sector wanting to throw them in the dumpster, you could say I was on pins and needles while sorting through my dad’s house. I mean there were paintings all over the place.

Oh. Let me not fail to mention the real life wicked witch who inhabited my dad’s basement. She stole his valuable collection of card decks and his rarest books, not to mention his debit card, bank statements, and well, I could go on.  She freaked me out big time. And she gave paintings to her friends. Once visiting my father in Colorado from New Mexico, the woman was proudly showing me how she had organized my dad’s book cases and storage areas. She said she had “sorted” the paintings. What did that mean? In a controlled panic I asked if she had gotten rid of any. She told me, “Oh, don’t worry.” I kept the good ones.” What???? 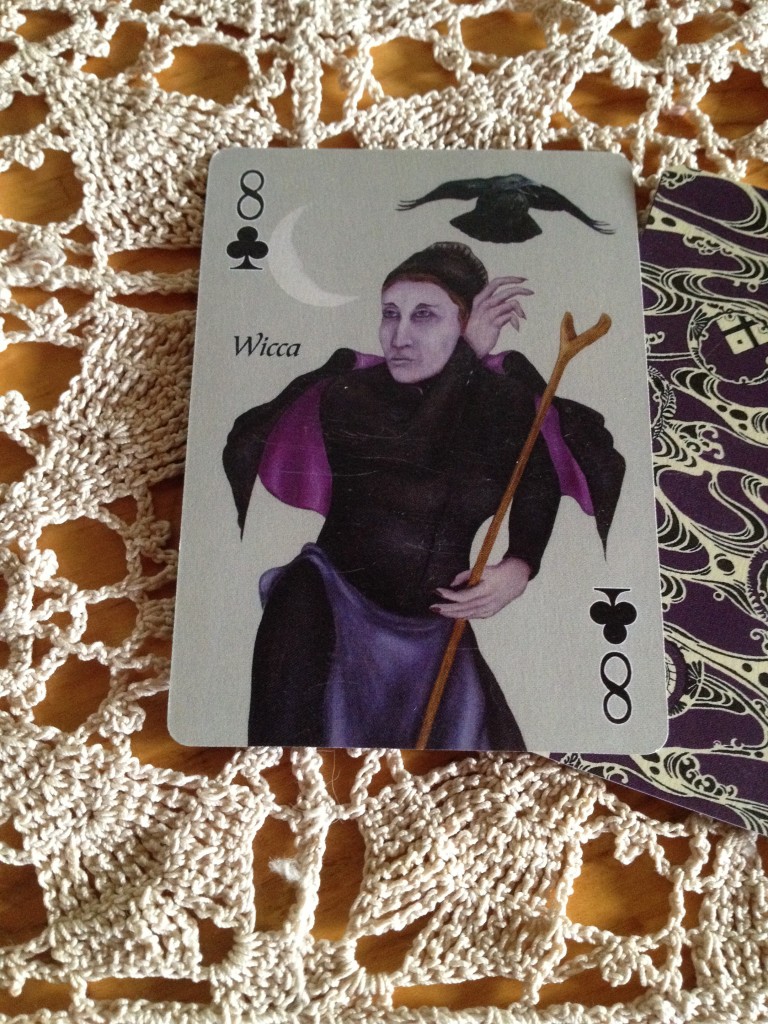 A polite representation from the new deck for the wicked witch that lived in dad’s basement apartment.

So now, with all that remains of these irreplaceable gems tucked away safely after so many years of chaos, I am here in my little house in Santa Fe creating this deck. Now that independent deck publishing is a present day reality, it is time. And it is no small task. From repairing damaged paintings (all had scratches, others had glue and mysterious paint, some had full on canvas punctures,) replacing yellowed varnish, professional photography, recreating missing paintings, and hauling these gigantic originals around from various storage areas, I don’t know who else would have taken this on. The answer is no one. I do it because I love my dad, yes, but more than that I feel strongly this work deserves to be seen. And I am the one to do it.

So after all reckonings I am now left with 9 paintings, 9 cards out of 54, missing. Thank the powers that be that all these particular ones happened to have photo documentation of some sort or other in the rubble of my dad’s stuff. Some better than others, all old. Some only 2-1/2 inches tall. Some larger. All poor in quality. So the recreation process begins. In making this deck I have of necessity taught myself photo editing, of which I knew zero before. I didn’t trust anyone else to the process. I had seen all these paintings in person and I knew how they should look. I am the ultimate picky. And I am passionate. This project requires passion. I love these paintings. 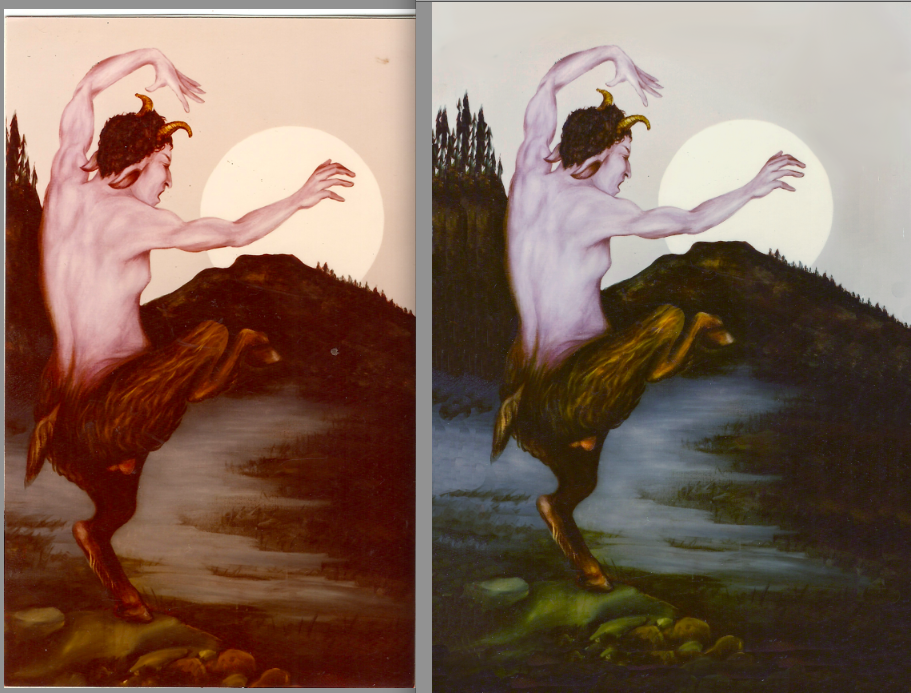 recreation of missing oracle painting for new deck, before and after.

So it has been a big fat learning curve, and I have spent weeks on things that would have taken half a day for someone else. I started with easy, free online tools and worked my way up to more complicated programs as I became more savvy. I have started over numerous times, redoing repairs I thought were completed as I learned my tools better. I have been working on this project for years. 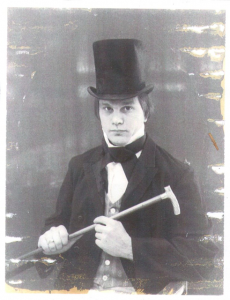 Someday I will write a blog post about my crazy father,* whom you can only imagine from his artwork was one unique individual. And he was about as eccentric as you will ever come across, and equally as incorrigible as he was adorable.

P.S. Hope to release this deck for pre-sale December 2014, so be sure to sign up for the newsletter or join the Facebook Fan Page for notifications.

*More info on my dad, the creation process, and project history in our collaborated book, “The Playing Card Oracles,” (plus his pen and ink illustrations,) and in my soon to be released new book publication. Stay tuned (!) for details.