and the Moth knows exactly

The Doors of Somlipith is a New Book and Card Set for divination with playing cards, by Ana Cortez and CJ Freeman. Published by Schiffer Red Feather, it is due on bookshelves March 2023. 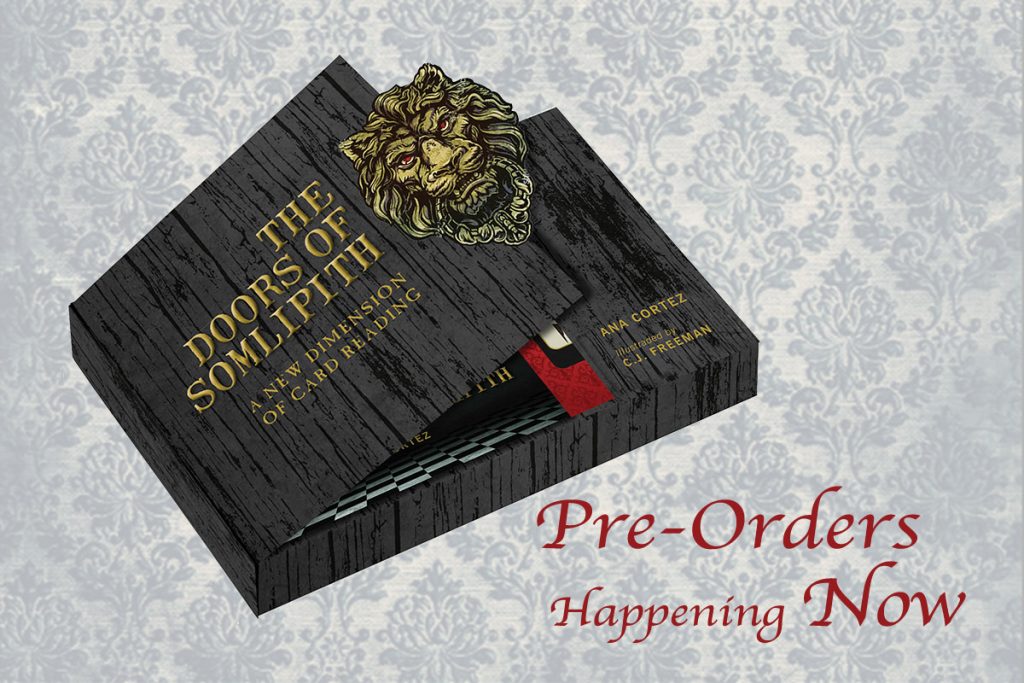 This interview was conducted by Lea Modine, 2022, in Santa Fe, NM in Ana’s home.

Lea:
What is this book/card set about and how is it different than what you and CJ have brought us before?

Ana:
This book and card set is the first divination set that CJ and I have collaborated on since his passing in 2010, the first work created “through the veil.” It is the most mystical work we’ve done. It is also the first project guided by Somlipith, the Dream Moth pictured on the Ace of Clubs.

And for him to reveal himself,

Lea:
So tell us a little about Somlipith.

Ana:
My father always told me the deck was ruled by the Ace of Clubs, and I was always like, “yeah, yeah, okay.” It didn’t mean much to me. And I never got more information about it at the time.

During the writing of the new book this creature kept coming to me, whispering in my ear. He was powerful, mysterious. He revealed himself, slowly, as the Gate Keeper to the secrets in the 52 card deck. Following him was exhilarating, like chasing a black butterfly.

Lea:
And the name Somlipith? What is that?

Ana:
It’s his dream name. His ancient name. But actually sometimes the Moth appears as female. It’s a shapeshifter. So technically he/she. 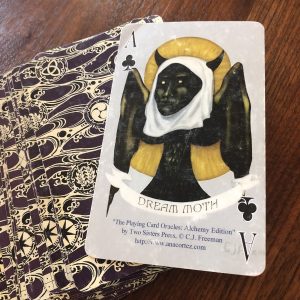 Lea:
Okay cool. So what can one expect exactly, from this book and deck?

Ana:
Well, I can only reveal so much right now. It’s not out yet, only available for pre-order.

But of course, like our previous works, it’s divination with playing cards. And the images in the deck are from CJ’s very first illustrative work, his most intuitive rendering of the 52 cards. It was formerly published as “The Playing Card Oracles, Alchemy Edition.”

And there’s an entire world that those images lead into. That’s what the book is about. But it’s a world that hasn’t been tapped into before. It was only possible at this time, as my dad and I worked together, as mentioned, through the veil.

It entirely blew my mind. 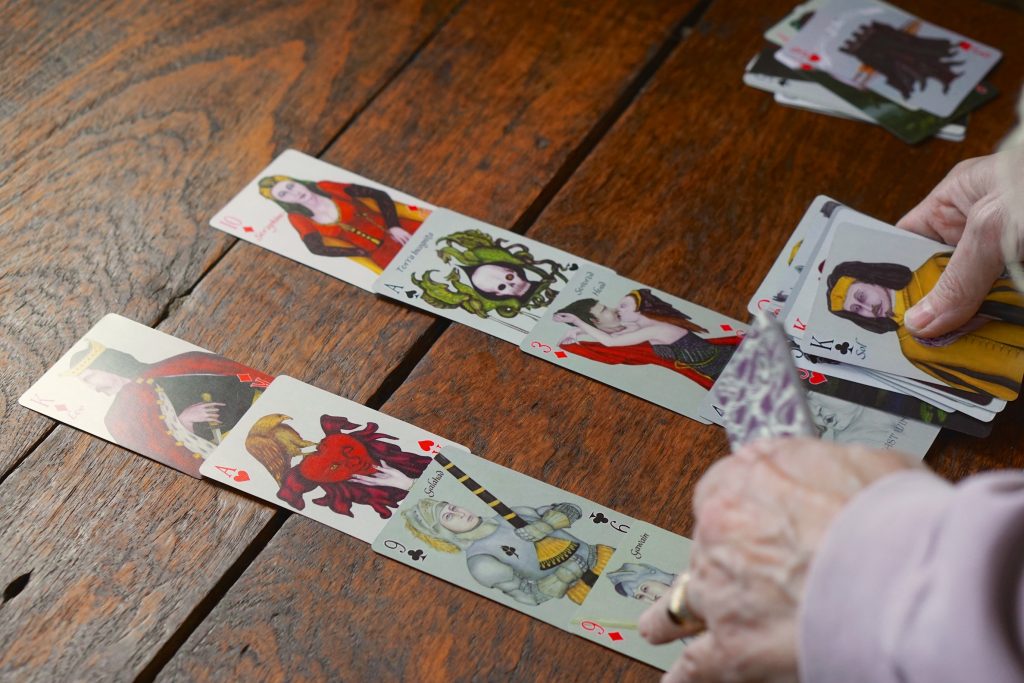 The images used in the “Alchemy Edition Deck,” will be newly reprinted by Schiffer Red Feather, 2022.

Lea:
Can you say more? About the mysteries?

But I can say, cards – playing cards- are a time capsule. Like a packet of information, a download, so to speak. Only we weren’t ready to receive the download until now. We got parts of it before. But we needed the upgrade. The information is for right now, this moment in time. It’s to help us awake, and to attune us to our true nature, which has been distorted through cultural programming for centuries.

“I figured out that tippy toeing

around my true feelings and intuitions

about the cards just acted as

a block for everything.

I’m done with that now.

There isn’t any time.”

I know that’s a lot. Probably sounds like a bunch of crap to most people. I can’t worry about that anymore. I figured out that tippy toeing around my true feelings and intuitions about the cards just acted as a block for everything. I’m done with that now. There isn’t any time.

Ana:
This new set is about bravery. It’s about owning our power. It was that for me, writing it. And it is there for the reader, if they want to take it.

It’s a climactic moment in human history, and the Moth knows exactly what he’s doing. He/she.

He’s a shy creature. And for him to reveal himself, that’s a big deal.

Ana Cortez is Author of “The Playing Card Oracles, A Source Book for Divination”; “Oracle Alchemy, The Art of Transformation in Life and Card Reading”; and the soon to be released “The Doors of Somlipith, A New Dimension of Card Reading.” (Now available for pre-order at Schiffer Red Feather and Barnes and Noble.)