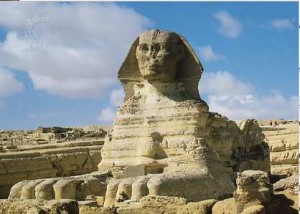 Ancient Egypt is synonymous with cats. The great Sphinx is depicted as a hybrid being: part cat, part human. Cats were revered as sacred. Cat-like eyes appear in the Egyptian depictions of people. But does this point to more than a fetish for these furry felines? Could this be a clue into the nature of aliens in Egyptian history?

In answering this question it is interesting to note that ancient Egyptians were particularly interested in the astronomy of the star Sirius. Multiple signs of this have been discovered, including perfect astronomical alignments of pyramid features to Sirius.

Now we come to a connection. Numerous people who claim to have been visited by Sirians have described them as cat-like. Photos depicting visitations appear with mysterious, misty cat features.
This begs the question: Could Sirian beings have visited ancient Egypt? Is it possible they even mixed with the Egyptian race at that time to produce hybrid DNA? Certainly humans possessing cat features might suggest this and may have been a pictorial clue left for us by Egyptians in their relics.
Were the rulers of Egypt super human by virtue of their supernatural DNA? Did they possess special knowledge and powers bestowed on them by their mixing with the Sirian race?????
Many cultures have written of their “Gods” from the sky having divine “relations” with human women to produce offspring with special abilities. Could these be more than myths? Is it a coincidence that modern day accounts of mysterious pregnancies purportedly associated with extra-terrestrial encounters abound as well? Is this the same phenomenon? Are extra-terrestrials inserting their DNA purposely into the human race?
It is no secret that earthlings are experimenting with DNA, so why is it so far-fetched that beings from other planets wouldn’t be doing the same?
When discussing this connection between the Sirians and Egyptians over the telephone with my good friend Astarte, we simultaneously (as it often happens for us) received multiple waves of very strong “downloads.” Very exciting!!! I have come to understand these waves of spine-tingling energy as my guides in spirit shouting “Yes! Yes! Yes!”
The supernatural exists amoung us. It is a reality, not a fantasy. I believe we all possess abilities beyond what our “rational” minds allow us to think. Is it possible there is a little supernatural DNA that has been mixed in and passed down to all of us, just waiting for activation? And just what would it take to activate it?
That, dear reader, I will leave to your very own fantastic imagination…..